Efforts to enhance the health of Lake Simcoe over the past several years are at risk of being overshadowed by two critical threats: climate change and the impacts of development.

Lake Simcoe is under threat.

Lake Simcoe has a rich and varied history of First Nations culture, of farming, fishing, forestry, ice harvesting…small towns and large towns, and more recently cities are situated around it, and now run-away urban sprawl threatens its health.

Lake Simcoe is a microcosm of the challenges confronting water and natural resources in Central and Southern Ontario today.

A recent study by the Nature Conservancy of Canada highlighted some of these threats, concluding that our ecoregion, as well as much of Southern Ontario, is in crisis.1Southern Canada’s crisis ecoregions: identifying the most significant and threatened places for biodiversity conservation

Together with the Rescue Lake Simcoe Coalition we’ve published a report highlighting some of the biggest threats to the health of Lake Simcoe and the communities surrounding it. 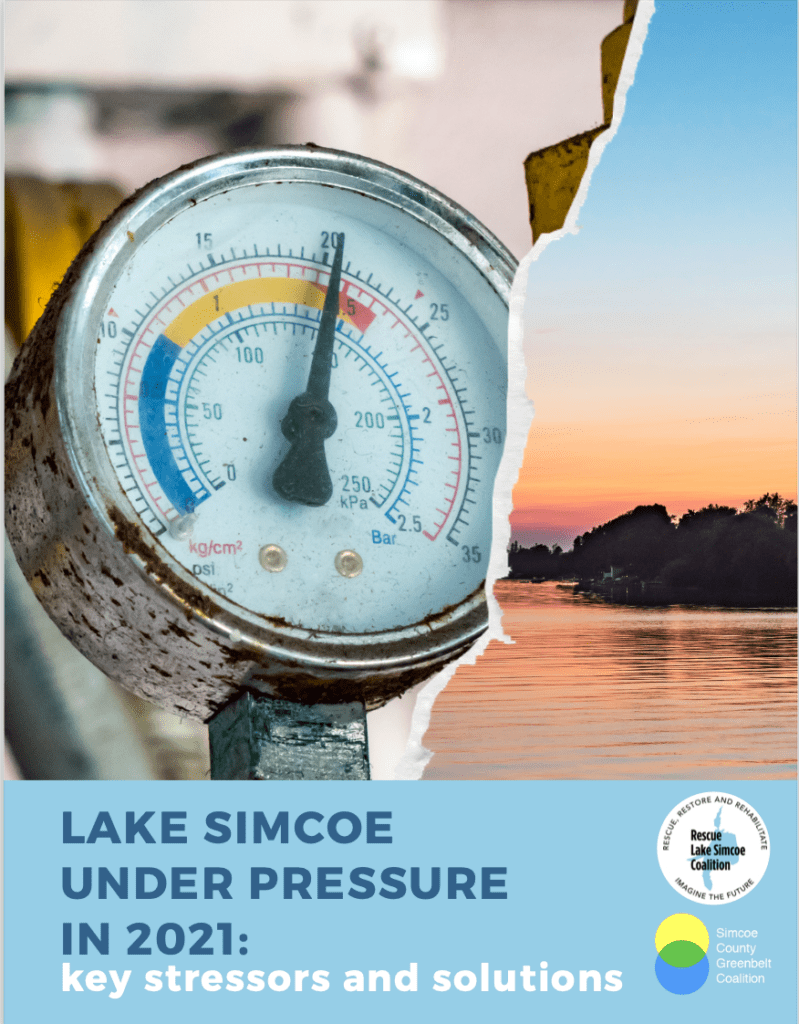 In this report we outline the decisions pending this year that affect Lake Simcoe. And, we ask a critical question – does the left hand know what the right hand is doing?

Who is looking at the cumulative impact of all of these activities on Lake Simcoe’s health?

Read the report and take action to protect the lake.

They are all meant to address pressures of population growth, which is needed, but they do so in ways that are environmentally destructive, to the extent that the future viability of the Lake as a healthy ecosystem is questionable.

The threats outlined are:

These issues are interconnected, with the UYSS and Bypass providing infrastructure for continued urban expansion, whereas the Orbit and aspects of the Growth Plan represent an example of that expansion and the justification for it, respectively.

It’s important to note that there is nuance underlaying these issues – they aren’t inherently bad. The UYSS or the Bypass or The Orbit are all intended to address population growth in the coming decades, which absolutely needs to be done.

Our concern with them, however, is the way they are being done does not value the resources that this growth is going to require, whether that’s the water or the air or the farmland or the natural habitat, all of which we will increasingly rely on as more and more people move into the region.

The Bypass, for example, is meant to address congestion concerns, yet we know that simply building more roads in fact leads to more congestion. This is called “induced demand.” (Anyone familiar with the DVP around the 401 should wonder what will happen when more car traffic comes across from the 400 to the 404 and funnels southward towards the downtown.) Simply expanding capacity for an inefficient type of transportation doesn’t make it efficient, it simply increases the amount of inefficiency.

The Orbit, a mega-development proposed just outside of Alcona in Innisfil, is pitched as a ‘green development.’ It is situated on the GO Train line and is supposed to have a stop. Proponents say that this will enable residents to commute to work in the GTA by train. On the surface this is a good thing. (Particularly given the need to move away from single car transportation highlighted above.)

Yet this development will be done on what is currently prime farmland, outside of the current boundary.

Intensification to accommodate this population should occur within the built boundary of Alcona, as well as in other commutes already served by transit closer to the GTA. This leverages existing infrastructure, including transit that is in addition to GO service, and enables achievement of complete communities where we need them.

The fact that more people will need these resources in the future means that we need value them as such, to use them far more prudently to ensure that they will continue to support a high quality of life.

What can you do?

Just being here and reading through this post is a really great start. Keep it up! Sign up to our newsletter, which you can do below, and head on over to the Rescue Lake Simcoe Coalition and sign up for their’s as well.

You can also write letters to the editor in local papers.

Some questions to consider as you are writing your letter:

Some of the key problems:

Submissions can be made to the following addresses:

We rely on support from people like you. Governments have failed to act to protect our communities and the futures of our children and grandchildren. They continue to treat our environment as if it’s incidental to life, rather than a foundation for it. We need strong community organizations to fight for our future now more than every. Please consider donating to support our work.